I wanted to send a message to Andy … Roughly 6 years ago Andy matched our family with a Malinois named Drew. With a heavy heart I wanted him to know that Drew passed away this week due to a tumor on her heart. We wish we could have had 16 years with her instead of six, but I wanted him to know that Drew transformed our lives in profound ways. From offering protection when my husband was traveling to being the first individual our autistic son spoke to — Drew was a perfect fit for our family and everyone loved her — and this extends beyond the immediate family. This fact was even reflected at the vets office when every single staff member came to visit Drew when she was sick over and over again. Her personality was perfect. That is a testimony to the work being done at Andy’s. But you do so much more than train dogs. The time you spent working with us on training, advising us on how to introduce our kids to dogs and even wisdom for handling Aella — our puppy “oops” (who has been given back to the original trainer and is doing very well) is priceless. You don’t train dogs, you nurture families and I thank you for that. It is much too early now, but when the time is right to introduce a new member to the family Dogs by Andy is the only place we will trust. Thank you for bringing Drew into our lives.

I can’t say enough about Dogs by Andy! My dog, Alfred, a Tibetan Terrier, has been difficult since puppyhood with a variety of negative behaviors including extreme anxiety. I tried everything from vets, trainers, meds, books, food and “advice,” but nothing worked until I finally had him off-leash trained at Dogs by Andy by their wonderful trainers. Now Alfred is content and confident and we are a “happy couple.”

The facility at Dogs by Andy is clean and professional. All the staff are friendly and helpful at every turn. I never have to worry about boarding because Alfred is now “one of the family” at Dogs by Andy. I couldn’t be happier!

We are in the 7th week of our training program and have made amazing progress in that time. Our hundred-pound American bulldog, Otis, was a little rambunctious and sometimes difficult for my wife to walk. Our trainer has been great to work with. She genuinely likes our dog and he is always excited to see her. The trainer always greets my wife and I with a smile and patiently answers all of our questions. She is not just a dog trainer, she is an excellent people teacher! We couldn’t be happier with the results that we’re getting and the interaction we’ve had with the trainer. We highly recommend Dogs by Andy.

This is one our dogs, K-9 Vega, who works for the Monroe County Sheriff’s Office in I.A. K-9 Vega was asked to come to the post office to do a package search. She alerted on a box that contained these cookies witch were baked with Marijuana. The cookies were then delivered to the addressee who was arrested. Interesting fact — the package was sent from her MOM. 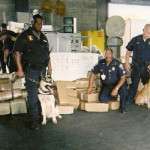 Askem was called in by US Customs to search containers at a port in Riviera Beach and Mangonia Park, FL. Askem had been sold to the local Police Departments by Andy Hanellin. Officer Klubens currently works with Askem. Askem came up with 3,500 lbs hidden behind a false wall in a container. Askem was bread, trained and sold by Andy of Dogs by Andy K-9 Services.
I just wanted to thank Andy. I was trained by Andy to train Cooper 16 1/2 years ago. After only 5 weeks, Andy told me Cooper was ready for trials, but I never entered him. I wanted to thank Andy for helping to make Cooper the wonderful dog he was. I never had worries about him, and trusted Cooper in all situations. I recently put Cooper down. He was almost 17 years old. I can’t thank Andy enough for helping me to make Cooper the perfect dog.
Arthur Bamel